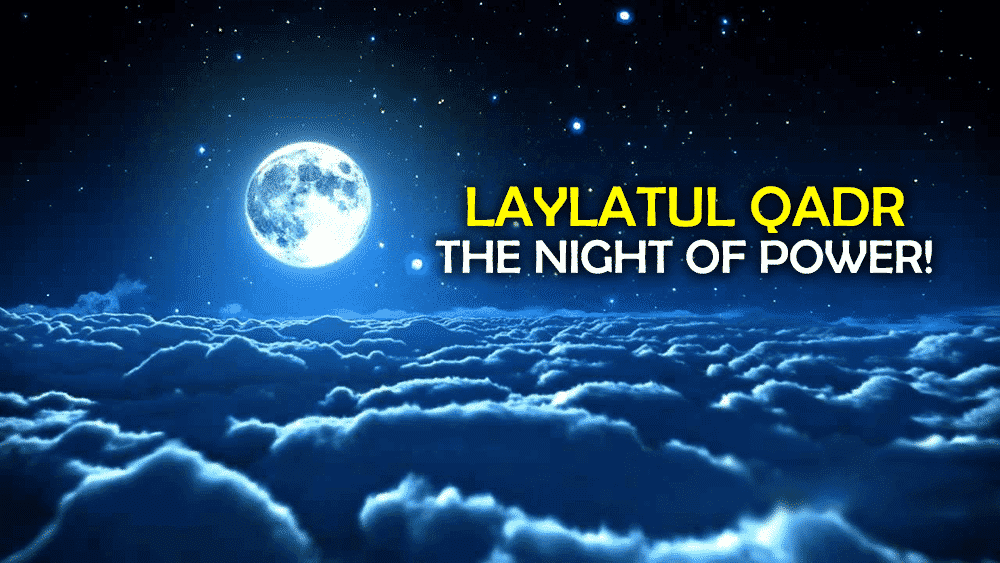 Although the immense blessings of Ramadan are well known, the last ten nights of Ramadan are even more important and even more blessed than the rest of Ramadan. In these ten nights is a night that Allah ﷻ describes in Surah Al-Qadr in the Holy Quran tells us is better than 1000 months (yes, months – not days). That’s the night of the “Laylat Al-Qadr” or as in know in English as “the Night of Power.”

The Messenger of Allah (peace and blessings of Allah be upon him) said:

"There has come to you Ramadan, a blessed month which Allah has enjoined you to fast, during which the gates of heaven are opened and the gates of Hell are closed, and the rebellious devils are chained up. In it there is a night which is better than a thousand months, and whoever is deprived of its goodness is indeed deprived.” [Narrated by al-Nasa’i, 2106; Ahmad, 8769. classed as saheeh by al-Albani in Saheeh al-Targheeb, 999]

This means worshipping Allah in Laylat Al-Qadr is better, in reward, than worshipping Him a thousand months, which is equal to 83 years and 4 months. The best part is that ALL your past sins will be forgiven when it's done correctly and with sincerity. It is narrated by Abu Hurirah RA that the Prophet SAW said:

“Whoever established prayers on the night of Qadr out of sincere faith and hoping for a reward from Allah, then all his previous sins will be forgiven." [Sahih Bukhari: 1901]

Although the exact night on which Laylat Al-Qadr occurs has not been mentioned anywhere, however, Prophet Mohammad SAW has directed us to seek Laylat Al-Qadr during the odd nights of last 10 days of Ramadan. The same is also evident from the following Hadith: Narrated by Aishah RA that Messenger of Allah SAW said:

“Search for the Night of Qadr in the odd nights of the last ten days of Ramadan.” [Sahih Bukhari: 2017]

But it does have signs and a time frame of more likely occurrence. There are two kinds of signs when it comes to identifying Laylat Al-Qadr. Those that occur on the night itself, and ones that immediately follow it. As for the signs occurring on Laylat Al-Qadr, the most reliable sources point to the following five:

So, in preparation for the grand finale, here is a checklist of some of the things that we can all do to make the remaining days of Ramadan work to our advantage:

The Holy Quran was first sent down from heaven on this night. The same is also evident from the following Ayahs of the Book of Allah:

The Revelation of the Holy Quran; a sign of Mercy, a guide and a blessing of Allah to mankind. Anyone who is interested in finding the best guide, he/she should look into the teachings of Quran Kareem. Perhaps you can choose Surahs or passages from the Quran which you have heard in Taraweeh this Ramadan to recite. If you attend a class where the recitation of the Quran is taught, this is a great time to put your knowledge into practice.

Praying on this night is also a Sunnah of our beloved Prophet. Messenger of Allah SAW would engage himself in devotion during the last ten nights of Ramadan more than he did in any other time of the year. The same is also evident from the following Hadith: It is narrated by Aishah RA:

“When the last ten nights began (of Ramadan), Allah's Messenger (S.A.W.) kept awake at night (for prayer and devotion), wakened his family, and prepared himself to observe prayer (with more vigour).” [Sahih Muslim: 1174]

Itakaaf in the mosque during the last 10 days of Ramadan is also a great deed and it is also Sunnah of our beloved Prophet SAW. The main purpose of Itakaaf is seeking Laylat Al-Qadr as the same is evident from the following Hadith. As narrated by Aishah RA, who said:

Prophet SAW used to pray so much during Itakaaf that forehead of our Prophet SAW became blacken due to continuous prostration before Allah. As reported Abu Sa'id al-Khudri RA:

“Prophet SAW adhered to his place of Itikaf and his forehead was besmeared with mud and water." [Sahih Muslim: 1167 (b)]

3. INCREASE REMEMBRANCE OF ALLAH OR DHIKR

One of the possible meanings of the Night of Qadr is the Night of lack of space. According to some narrations so many Angels are descending to Earth for every matter during that night, which will make it as if there is the congestion of Angels

According to Ibn Kathir, the angels descend in abundance, under the leadership of Jibirl (A.S.), during the Night of Al-Qadr. The angels descend with the descending of blessings and mercy, just as they descend when the Quran is recited, they surround the circles of Dhikr (remembrance of Allah) and they lower their wings with true respect for the student of knowledge. The angels continue giving the greetings of peace during the whole Night of Al-Qadr to the people who are busy in Supplications, Prayers, Quran Recitation, Dhikr of Allah or any remembrance of Allah until the time of Fajr (dawn) comes.

After Fajr, we should be vigilant about saying all of the adkhkar (remembrances of God) of the day, and should say 100 times: La ilaha illa’Lah. Wahdahu, la sharika lah. Lahu’l-mulk. Was lahu’l-hamd. Wa huwa ‘ala kulli shay’in qadir. “There is no God but Allah, His Oneness. No partner has He. For Him is all the domain. For Him is all praise. And over all things, He is powerful.”

4. INCREASE SUPPLICATION OR DUA FOR YOU AND FOR OTHERS

It was narrated from Aishah RA that she said: "O Messenger of Allah, what do you think I should say in my supplication, if I come upon Laylat Al-Qadr?" He said: "Say:

Make long, sincere and deep Duas specially during the last part of the night. That means for instance, waking up one hour before Suhoor time to ask Allah for anything and everything you want that is Halal. This can be done using the Duas of the Sunnah, but also Dua in your own language, with sincerity and conviction. Also try to memorize a different Dua every night They don't have to be long. They can be just one line. And be sure to know what they mean generally at least, even if you don't know the exact translation in English. You can put them on index cards (or and keep them with you during the day, glancing at them during work, while driving, waiting in line, etc.) Then practice them at night in prayer.

5. READING BOOKS OF HADEETH TO LEARN ABOUT SUNNAHS OF PROPHET MOHAMMED SAW

Read about the Prophet's life, which can increase your love for him and Islam by seeing how much he struggled for Allah's sake. It may inspire you to push yourself even harder during these last ten nights. This community is built on sacrifice.

Choose the latest Surah or Surahs you've heard in Tarawih and read their translation and Tafseer. Then think deeply about their meaning and how it affects you on a personal level.

As well as praying for our loved ones, we pray for those less fortunate than us and, as part of our faith, do what we can to help. Whether you choose to help someone in need by way of donating your time or contributing money; by giving towards sadaqah jaariyah on behalf of a deceased loved one or should you choose to donate your zakat, ensure you give as much as possible on this auspicious night. Even the smallest act of giving someone a glass of water or smiling at another being is a great act of charity in Islam. You can any donation through our donate page today here. It is also recommended to give your zakat, sadaqah, or fitra donations being spread across the final ten nights, including Laylat Al-Qadr for additional rewards in the Hereafter. Save up, well ahead of time, so that you can give, especially to those in need, on Laylat Al-Qadr so as to maximize the reward of the good deed. Some encourage believers to save up throughout the entire year, for even if one can give only $1, it will equal giving $30,000.

One should invite others to break fast with him or her. The act of charity is highly regarded in Islam. It brightens up the essence of sharing to help deserve the poor ones. Special importance is given to Charity in Islam as stated, The Messenger of Allah SAW said:

"He who gives food for a fasting person to break his fast, he will receive the same reward as him, except that nothing will be reduced from the fasting person reward.” [Ahmad, at-Tirmidhee, Ibn Maajah, Ibn Hibbaan, Saheeh]

Ask yourself those questions that need to be asked. Do an evaluation of where you are and where you are going. Let this evaluation lead you to feel happiness for the good you have done and remorse for the bad you have done. This latter feeling should make it easier to seek Allah's sincere forgiveness when making the Dua mentioned in tip number one above. Once you've done a self-evaluation, you can plan on where you want to go, at least in the next 12 months. Laylat Al-Qadr is a great night to be thinking about this (without taking away from your worship), since you'll InshaAllah, be in a more contemplative state. You may choose to dedicate one night of power for evaluation and one night for planning for the next year.

May Allah give us the strength, the power, the courage and the effort to do our best to obey Allah and follow His teachings. May Allah guide us and strengthen our Iman. We pray that may Allah help us live another year with sincerity and devotion. May Allah make us realize that one year of our life is over and we are one year closer to our graves. Let us wake up and do our best to please Allah in our daily life. Let us ask Allah for forgiveness. Ameen