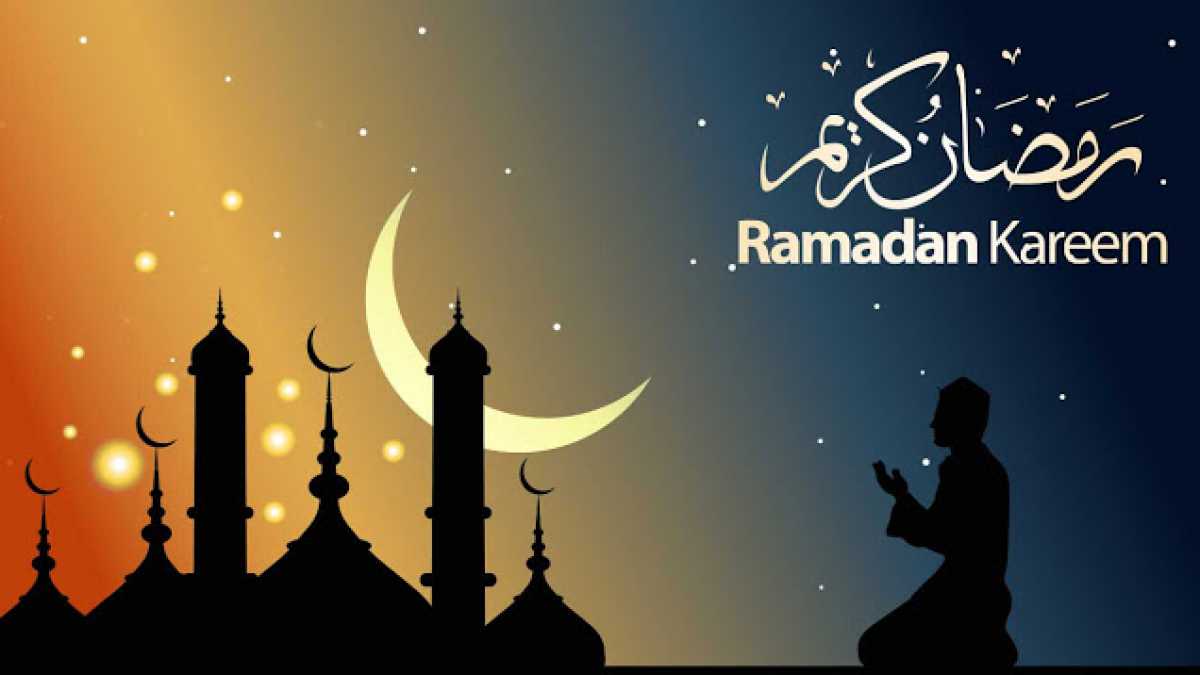 The prophet Muhammad ﷺ said, "Whoever observes the fast during the month of Ramadan, (while) believing in Allah and seeking His rewards, will have his past sins forgiven." [Reported by Imaams Bukhaari, Muslim and others]

Ramadan, also referred as the Fasting month, is observed by Muslims worldwide in the ninth month of the Islamic lunar calendar year. During this holiday, Muslims are not supposed to eat or drink anything from sunrise to sunset given that fasting is one of the five pillars of Islamic principles. It is obligatory upon every sane, healthy Muslim whose reached puberty and is not traveling during the time of fasting. As for women, they must not fast if they are menstruating or having post-childbirth bleeding. They are also instructed to avoid evil thoughts and sinful behavior such as cursing, lying and fighting except in self-defense.

According to the Islamic belief, the Quran was first revealed to Prophet Muhammad during the Holy Month of Ramadan as he meditated in a cavern outside the Holy city of Mecca. The month is therefore meant to commemorate the first revelation which was sent down on Laylat al-Qadr popularly known as (The Night of Power).

The Essential Elements Of The Fast

There are two essentials elements for your fast to be valid and accepted. They are:

1 . Intention:
You must have the intention to fast before fajr (dawn) every night during the month of Ramadan. The intention does not need to be spoken, because in reality it is an act of the heart, which does not involve the tongue. It will be fulfilled by one's intention from the heart to fast out of obedience to Allah ﷻ seeking His pleasure.
2. Abstaining from acts that nullify the Fast:
The second essential element for your fast to be accepted is that you abstain from the acts that nullify the fast from dawn to sunset. For example, you are not supposed to engage in sex during fasting hours, chew gum, smoke, backbite, lie, swear, gossip and all forms of sinful behavior.

If you maintain these two essential elements during fasting, then your fast will be valid and accepted.

Six Actions That Invalidate Or Nullify The Fast

All scholars have agreed that the following acts will invalidate the fast. They are:

1. Intentional Eating or Drinking
If someone eats or drinks due to forgetfulness, a mistake, or coercion, then his fast is still valid and should continue to fast. If you choose to eat or drink, for any reason, then your fast will become invalid.
2. Intentional Vomiting
If one is overcome by the urge to vomit, and vomits unintentionally, then he should continue to fast. If someone chooses to vomit, for any reason, then his fast will become invalid.
3. Intentional Sexual Intercourse
If one has sexual intercourse while fasting, then he must perform kafarah, expiation of the sin. (Fasting continuously for sixty days or if unable then one should feed sixty poor people).
4. Menstrual or Childbirth Bleeding
The fast becomes invalid during menstrual or post-childbirth bleeding. Even if such bleeding begins just before sunset, the fast of that day is invalid and the day must be made up at a later time.

Actions That Are Permissible During Fasting

There are some actions that are permissible to do while fasting, which will not nullify the fast. For example:

1. Taking a shower
It is permissible to shower, for any reason, even if you are showering due to thirst or being overheated.
2. Rinsing the mouth and nose
It is permissible to rinse the mouth and nose without exaggeration; using too much water may cause you to swallow water, which may invalidate your fast.
3. Applying eyeliner or eye drops
It is permissible to apply kohl (eyeliner) or eye drops or anything else to the eyes, even if some taste from it finds its way to the throat.
4. Taking injections
It is also permissible to take injections for nutritional or medical purposes; there is no text that proves this invalidates the fast.
5. Taking suppositories
Similarly, it is permissible to have an enema or douche. The injection of liquid into the rectum through the anus for cleansing, as a laxative, or for other therapeutic purposes, or the use of a suppository (a solid medication designed to melt within a body cavity) or any other medicine that can be used in the private parts, whether in the front or back is permissible. There is no text that considers these acts to nullify the fast.
6. Accidental consumption
Your fast will not become invalid if you consume something that you could not protect yourself from. For example, swallowing your saliva or accidentally swallowing dust or sifted flour that has accidentally entered your mouth.
7. Tasting food with the tongue
Your fast will be valid even if you taste food with your tongue or use toothpaste or mouthwash as long as nothing is swallowed.
8. Breathing in different scents
9. Kissing and embracing one's spouse
It is permissible to kiss and embrace your spouse as long as one is able to control oneself.
10. Drawing blood
It is also permissible to draw blood in any amount for any reason. If drawing blood weakens the person, it will be considered a disliked action.
11. Being in a state of Janaabah (a major ritual impurity)
Your fast will still be valid even if you find yourself in a state of Janaabah after Fajr (dawn) has arrived. Ghusl (a full bath) can still be performed once the time of Fajr has begun.

Who May Be Excluded From Fasting?

There are certain situations when it is optional to fast during the month of Ramadan, however, the fast must be made up at a later date. This is the rule for the sick or for the one who is traveling.

However, women who are experiencing post-childbirth bleeding or are in their menses are not allowed to fast until their bleeding ends. They must make up the days they missed fasting at a later date.

For those who cannot fast due to a permanent illness, old age, diabetic patients and those with disabilities and special medical conditions, they have to pay Fidyah, which is similar to kaffarah in that it helps pay for food for the needy, for each day that they have missed.

Pregnant and nursing women, who are afraid that fasting may weaken them or the child, have the option of fasting or not. After Ramadan ends, they have the choice of fasting or paying Fidyah (feeding one poor person) for each day that they had missed during Ramadan. However, according to the Hanafi School of jurists, such women are only to make up the missed days of fasting, and they are not supposed to feed one poor person a day. On the other hand, Imaams Ahmad and Ash-Shaaf'i, hold the opinion that if such women fear only for the baby, they must pay the Fidiyah and make up the days later. If they fear only for themselves or for themselves and the baby, then they are only to make up the missed days at a later date.

Generally, everyone who has passed puberty should take part in Ramadan fasting. Although children are not supposed to fast, you can make Ramadan for kids interesting. Read to them books about Ramadan, teach them the appropriate Ramadan greetings, involve them in preparing Iftar dinners and when the holy month ends, celebrate the Eid-al-Fitr together.

What Do You Eat For Ramadan?

There is a common misconception that Muslims don’t eat or drink at all for the 29-30 days of Ramadan. This is untrue as the body requires nourishment to keep going. The only time Muslims are not required to eat and drink is during the fasting hours. That means from sunrise to sunset. However, you can eat before dawn also known as Suhoor (morning meal) and after sunset called Iftar (evening meal). There are no restrictions on what you should eat, except for the already prohibited foods in Islam like pork products and alcohol.

Ramadan is a month not only when Muslims keep away from food, but everything we do during this month causes us to develop taqwa (piety). The Holy month of Ramadan is where we recharge our Imaan (faith) for the entire year. There are some acts that are recommended, and if you practice them, you will gain more rewards from Allah ﷻ such as and hopefully some of these things would develop into habits which we carry on with us for the year ahead:

How Long Is Ramadan?

There are no specific dates when Ramadan starts and ends. The Islamic lunar calendar does not match the solar calendar. Therefore, the dates keep shifting by about 11 days every year. Typically, the month begins on the last full moon of the particular month and lasts 29 or 30 days. For the holy month to end, the crescent moon must be seen at Mecca on the 29th day. If not seen, the month goes for an extra day and ends at 30 days. However, some Muslim organizations prefer following astronomical charts to plan events and activities ahead of time. Finally, the sighting of the crescent moon marks the end of the Holy Month. Muslims break their fasting by sharing meals with family and friends in a three-day festival known as Eid al-Fitr or the Feast of Fast-Breaking.

We ask Allah ﷻ to strengthen us in Ramadan, accept our fasts, and reward us with His forgiveness and the highest place in Paradise. Ameen.