1. The Declaration of Faith—The Shahada

The Declaration of Faith, the shahada, is the most fundamental expression of Islamic beliefs. It simply states that “There is no God but God and Muhammad is his prophet.” It underscores the monotheistic nature of Islam. It is an extremely popular phrase in Arabic calligraphy and appears in numerous manuscripts and religious buildings.

Muslims are expected to pray five times a day. This does not mean that they need to attend a mosque to pray; rather, the salat, or the daily prayer, should be recited five times a day. Muslims can pray anywhere; however, they are meant to pray towards Mecca. The faithful pray by bowing several times while standing and then kneeling and touching the ground or prayer mat with their foreheads, as a symbol of their reverence and submission to Allah. On Friday, many Muslims attend a mosque near midday to pray and to listen to a sermon, khutba.

The giving of alms is the third pillar. Although not defined in the Qu’ran, Muslims believe that they are meant to share their wealth with those less fortunate in their community of believers.

During the holy month of Ramadan, the ninth month in the Islamic calendar, Muslims are expected to fast from dawn to dusk. While there are exceptions made for the sick, elderly, and pregnant, all are expected to refrain from eating and drinking during daylight hours. 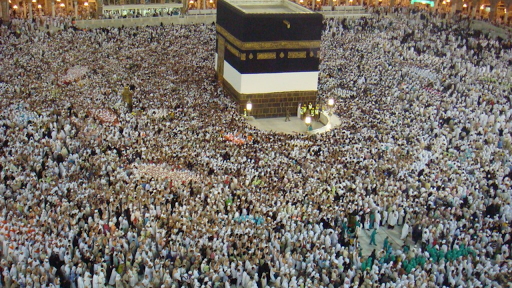 Hundreds throng around the Kaaba at the start of Hajj (photo: Al Jazeera English, CC BY-SA 2.0)

All Muslims who are able are required to make the pilgrimage to Mecca and the surrounding holy sites at least once in their lives. Pilgrimage focuses on visiting the Kaaba and walking around it seven times. Pilgrimage occurs in the 12th month of the Islamic Calendar.
Please follow and like us: